Here are two case studies which were used for my animal healing courses. 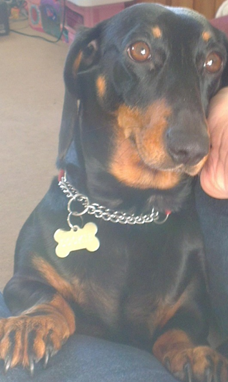 Cookie is a 3 year old black & tan smooth haired dachshund. Her human  companions asked me to help with Cookie's aggressive temperament & her continuous barking & growling at anybody who comes into the house. Cookie is very nervous with people & especially cars. I communicated with Cookie & discovered that she was very stressed & upset by the family's recent move. This was making her behaviour very erratic & she was not sleeping through the night without waking up.

Cookie found it very difficult to relax at the beginning of the healing sessions. She had a lot of blockages at her Third Eye, Solar Plexus & Root Chakras. I expained to Cookie what she could expect with the healing. As the sessions progressed, the energies affecting Cookie's chakras became less severe. Cookie would only co operate with her master present, this was when we communicated more. She explained that she bites people because they scare & offend her. She was frightened that people would hurt her. She felt frightened especially at night, & she felt that she had to show 'aggression' in case people thought that she was a 'Soft Touch'. At the end of her sessions, Cookie would return to her basket, which i was informed at the time was quite unusual for her in the evenings.

By sessions three & four, Cookie only barked a few times on my arrival. She was much more relaxed & seemed pleased to see me. Now she would sit & wait for me to sit on the floor next to her & would rest her head on my leg & lick my hand. Her whole body felt more balanced, the energies that had been very strong were now more subtle.

The energy around her Third Eye, Crown & Root Chakras, which before had been quite strong were now very calm, the blockages seemed to disappear. Her whole attitude seemed to change. Also her barking sessions when anyone arrives at the house seem to be shorter, & her aggression has calmed down, slightly. She now sleeps through the night without waking up & barking.  She is also spending more time in her basket, which is something that she wasn't doing before.